Hey guys, once again, sorry I'm so slow on updating stuff. Uhm, so here's some news! If you didn't know (I haven't posted it, but it's all over the place) a mini version of Legally Blonde the Musical is running in Korea. It's been really hard to find any pictures that aren't promos (which notoriously use completely different costumes) so I've been working off what I find on youtube, and you can expect a few screen captures soon(ish). So far it looks like the costumes are EXTREMELY different; for instance, the playboy bunny suit has a little fluffy skirt, the finale dress is shortwaisted, and the Positive outfit is a miniskirt and little vest.

Also, Legally Blonde is going to the Philipines and according to Wikipedia starts June this year. I haven't seen any pix on this--if you got them, send them in!

Also, and I initially found this via Lauren Zakrin's twitter, there's a Netherland production of Legally Blonde. There's a video of the cast performing So Much Better at some awards gala here. My thoughts on the costumes? Yikes! I do not like the pointy shoulders that Elle is wearing. And the promo is even worse: 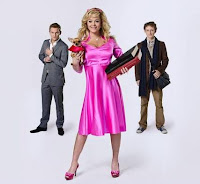 Is that what people wear in the Netherlands? Or is that how they think we dress? Thoughts?
Articled by Corbyjane at 19:40:00

I'm Dutch, and to be honest, I had a fit when I saw the performance during the award Gala you mention. I'm not sure what they were thinking. Her wig looked dreadful as well, I do hope they get something that looks less... "wig-y" when the show opens here.
The dress in the promo picure is just.... xDDD
I have no words for it.

To answer your questions: That is not what we wear here. Well, I like to think I dress better...
Also, I don't think that's the impression that most Dutch people have of you.

You know what confuses me most about this? The people who design these costumes are supposed to be trained to design proper costumes.
What is wrong with them?

If they screw up the Dutch Wicked Costumes, I will not be amused.

Hi Dyuve! I'm so glad people don't dress that way in the Netherlands, haha; I'm very reliever. ;) I agree I'm surprised that the costume designers would come up with... that... wow. I'm sure they are just working out a few bugs and the finished product will look SO MUCH BETTER (pun intended). Or at least I hope so.

From what I have seen of the Netherland Wicked promo art (elsewhere on this blog as well as on GalindasWardrobe.com) the costumes look lovely. Obviously it's too soon to know for sure, but I don't think you have much cause for alarm. ;)