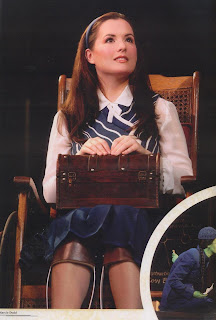 With just the girl in the mirror

Just her and me: the Wicked Witch of the East!
We deserve each other...
~Nessa Rose, "The Wicked Witch of the East"
NessaRose Thropp, Elphaba's little disabled sister, is kind of an interesting case. She of the "tragically beautiful" face starts out as a pretty unimportant figure, then gets shunted into place as one of the figures in the Galinda/Elphaba/Fiyero/Boq Love Dodecahedron. As her love for Boq is completely unrequited, she turns into a scary stalker chick, and by the time Elphaba comes back to check on her in Act 2, she's become the Wicked Witch of East.

Shiz Uniform: While our two protagonists (who, you know, swap roles as antagonist and protagonist throughout the entire show) are deliberately dressed in the two extremes of the school colours, NessaRose shows up dressed like all the other students. She has a white collared shirt on underneath her asymmetrical cream and navy vest, which she wears over a navy pleated skirt. She also wears a pair of giant brown boots on her feet, and a headband. Some productions have her wearing a navy headband, and some have her wearing a pink one.
Photo Gallery Article coming soon

Party Dress: When Boq invites her to the party (at Galinda's behest), she dons a beautiful pink dress. With every other ball personage wearing black and white, except the key figures, it's interesting that she wears almost a warmer version of Galinda's ballgown. It's strapless (she wears a light bolero-type jacket over it), a peach sheer kind of fabric, with pintucks down the front, and a ruffly skirt that is very similar in ways to both Elphaba's Act 2 dress and Galinda's popular dress. She wears the jeweled shoes her father gave her when she first comes to Shiz University.
Photo Gallery; Article

Governor's Daughter: When Elphaba checks in on her sister in Act 2 (not even because she cares: just because she needs a favour), NessaRose has changed into a controlling, abusing ruler who wears a close-fitting black dress. It has a high collar, buttons up the front, and flows outward in a full, pleated skirt. She also wears the iconic striped stockings and sparkly shoes we all remember from the movie.
Photo Gallery; Article coming soon
Nessa Rose Photobucket Gallery
Articled by Corbyjane at 17:47:00