"It's good to see me, isn't it?"
Glinda the Good
When conceiving designs for G(a)linda, Susan Hilferty said she was based on the sky: think clouds, stars... (there are some serious "airhead" jokes dying to be made here, guys). That being said, this dress is the "iconic" one for Glinda (she's at the Glinda stage for this dress... just so you nit-pickers are aware)--it does mimic, in style, the Wizard of Oz dress, as well as clearly having the "sky" element. 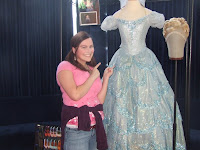 When I went to see Behind the Emerald Curtain, a behind the scenes tour of Wicked, our tour leader (Nicholas Dromard, who plays Fiyero in the San Francisco production) said that it is one of the only symmetrical costumes in Wicked. I knew this, of course, but he said the reasoning is because Glinda brings order to the chaos of Oz when she comes into her own as Glinda The Good. I found this interesting.

In its original incarnation, the dress had a much straighter skirt, sequins spread all over the dress, and more bell-shaped sleeves.
San Francisco Try-Outs / Early Broadway Article
Photo Gallery for Preview

Worn by Glindas in Stuttgart, London, and Sydney, I have dubbed this sweetheart neckline, pointed waist version the UK version because then I can refer to them as SF, US, and UK. However, it is not strictly the UK that has this gown, and I shall shut up now.
European Version
Photo Gallery for UK/European Version.

This dress features a scoopneck and more sequins than the UK version. It is worn by all current American Glindas and also the Tokyo production.
US Version
This version has it's own gallery on PB.

Construction: Julia wrote in to tell me that it  The Stuttgart one does not zip. She sent in the photo below, which clearly shows snaps and eyehooks. Thanks so much, Julia!

HOWEVER, when I was at BtEC, I got to see a later version of the KChen one, and there was a very visible zipper there. 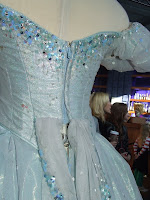 In the KAC photo, you can see one back-princess seam. Below, sideseams, and beside it, you can see the seams that start right where the neck meets the sleeve and end right at the edge of the waist's curved taper. There's a second seam that's fairly close to the side.

Possible pattern for the bodice: McCalls 4109.

Fluffy, puffed fabric: mebbe chiffon? I have no idea. They are sequined and have the ruffle along the edge. The top and bottom are rouched--I'd guess elastic.

I know this is hard to believe, but that's not a farthingale under there... no. That is a million and one petticoats. Layers and layers of fabric. It must weigh a ton. I'm sure there are layers of tulle, but I have been unable to find any evidence of a crinoline. This is probably why the circumference of the skirt fluctuates from production to production: possibly based on how much weight the actress can stand? I think the London production's is probably the most rounded... check out the fluffiness on Helen up there!

Petals: the handsewn, handbeaded petals are sewn to the petticoat. In a fitting with Kristin Chenoweth, Susan says they are smaller on top and larger lower down. The sequins run along the lower portion, giving them more weight (and sparkliness!). My guess for fabric... Susan just says "irridescent", which isn't helpful. Chiffon... which is my guess for everything, yes, but it's a very fun fabric. Whatever it is, it's shimmery, see-through, and probably really, really hot.
Jana emailed me to say: The fabric used for Glinda's bubble dress is a pearlized sheer fabric. (There are various names to describe it. It can be purchased from any Jo Ann Fabrics stores. Around $7.99 a yard.) 40% Nylon 60% Polyester. It is possible that is is actually organza, but typically organza does not have the same sheen that a pearlized sheer does. Nonetheless, it is not chiffon as you had suggested-chiffon is very delicate and has a lot of movement to it, whereas a pearlized sheer is more stiff. I couldn't find a picture of the blue, but here's a white pearlized sheer:

Thanks, Jana! I looked up "pearlised sheer" on Joann's website, and white, lilac, and pink are available here. I'm pretty sure they might have blue in the store, or you can use this information to try and find the same thing somewhere else. There's also a crinkly pearlised sheer here, and they do have it in blue. That might work for the sleeves... there's definitely some kind of crinkled texture going on there. (Both of these are $8.99/yard.)

Here are some highrez, close up shots, courtesy of Julia:

According to Julia, the really tight close-ups are of the Glinda alternate, and it is less beaded, but still sparkly. =D
You can see one of the petticoats in this pic of LBB & Eden:

I dunno what you call this. Neither does Dianne Pilkington: she's like, "Uhm... ruff... thing...?" But whatever it is, it is attached to the shoulder seam of the gown (as seen in the bts pic of Megan Hilferty)

It seems to vary production to production (pfft, typical) but I haven't invested much research into tracking who has what difs. I can't do all the work, you know. Sooo...
These ruffs are taller, skinnier, and less curvy.

The pics from the German production have kind of a pattern to it--it reminds me of broken glass, or puzzle pieces.

Perhaps "veins" is a better word. Anyway, I like it. It's also very sheer, which isn't seen in every collar, either. Here are some examples of opaque collars, where I believe it's just the same fabric as the bodice.

So in summary, class:

And, Ladies and Gentlemen, may I present: PHOTOGRAPHIC EVIDENCE!! 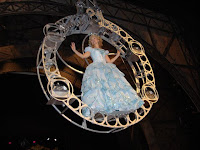 If you click and enlarge the picture, you can just see the navy blue tip of her shiz shoes.
In the second act, it looked like her shoes were the same ones she wore during One Short Day.

Jewellery:
Her crown & wand get their own special blog. Someday. She also wears a sparkly necklace.
According to my research, it comes in three styles:
1) Teardroppy (seen on Chicago, Broadway, and LA)

3) Choker: I've only seen this on Kristin Chenoweth, and in early stuff... later Broadway she's all teardroppy. This is just in the magazine scan.

Thanks for your contributions, Jana & Julia!

Oh my gosh! thanks so much for this! I am going to be making this all summer for my halloween costume, and have been looking for a pattern for the bodice, and the pattern you have here is amazing! thank you so much!

This is a FANTASTIC post. I have been obsessed with this gown since I first saw Wicked back- oh, goodness, I think 2005 was the first time. Anyway. Regarding the fabric the skirt petals are made out of: I have had the incredible fortune to see one of the US tour gowns backstage (believe me, I still get jittery over how awesome it was in person!), and the petals were definitely organza. The pearly stuff you posted from JoAnns is spot on. So go you! And if anyone is looking for it, I'm not sure about online availability, but the last time I was in our local store, they had pink, white, and the perfect pearly blue. :0)

This blog is awesome! I do a ton of costuming, and am definitely adding you to my list of research sources! :0)

Welcome aboard, The Little Corinthian!
The fabric suggestion was made by Jana, an awesome fellow reader: thanks so much for the concrete verification! Do you have any other insights on this dress? All articles, after all, are a work in progress. =)

Anonymous said...
This comment has been removed by a blog administrator.
8 November 2009 at 05:21

So I don't know. Maybe they experimented with having her wear the same necklace at some point?

This is the most awesome Blog.

I'm looking for a bubble gown replica of KC's San Francisco gown. Anyone that can make me one, please email me at framemamma@verizon.net.

OKAY SO HERE GOES
I want desperately to make a bubble dress (and the Popular dress, but I'm getting ahead of myself) and this has helped a lot. When I make my costumes I cheat and I use thrift store stuff :3 but here there's really no room for that too much here. A ton of these pics didn't show up which I was super devastated about but just the theories here can help me visualize the dress and how the heck I'm gonna pull it off. Thank you!

I knew there was a safety harness in the dress from watching a bootleg video of the play. When Glinda gets into the bubble near the end of the show you can see one of the flying monkeys behind the bubble reach up and clip her in.